Last week, each office took on the challenge of an escape room. We were split into four teams to see who could complete their mission in the quickest time. The two UK teams had the same mission – to infiltrate a command centre and destroy a mind controlling satellite. 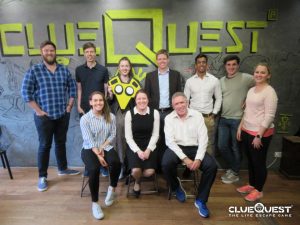 The SA teams had two different tasks. One team found that the engine on their submarine had stopped and they were sinking, they needed to restart the engine and get back to the surface. The other team boarded an abandoned ship to recover pearls and had to escape before they were hit by a deadly storm. All four teams had an hour to complete their mission.

There is always that pause after an escape room begins, where we look at each other and assess the room slowly. Then realising the clock has started ticking down and we need to find ‘something’. For my team, we found the ‘something’ quite quickly. It was a large hollow bolt which had a key inside. However, we didn’t realise this for about 5 minutes, when the organisers decided to radio in and give us a hint. The other team, with Giles being a renowned fidgeter, had opened the bolt straight away to uncover the key. They continued on in coordinated chaos with Lori and Cat leading the way.

In SA, one team had a range of skillsets that were brought to the table. Carmé with her logical actuarial thinking, Robyn with her soft skills and cooperative nature and Stephan with his out-of-the-box thinking. At one point he even felt the need to bring his lock picking talent to the table! The other team described themselves as a clowder of cats running wild!

At one point, Shil found a red herring in the form of a little plastic goat. He continued on looking for the next clue with the goat in hand hoping it would become useful later on in the game, but was saddened to find out it was useless.

At the end, there is always a winner… The quickest team got out with 11 minutes 45 seconds to spare and with no clues! The next team had 6 minutes 28 seconds left and the third team got out in the nick of time with 1 minute 58 seconds left. Unfortunately, the last team didn’t complete their mission and were stuck in the room! We all had a lot of fun and it was great to see how our teamwork transferred to other activities!